The following article was written by Peter Baergen, the recipient of the 2014 Generation Joshua Future of America Leadership Award.

So, you’ve been to iGovern. Maybe you’ve participated in a Student Action Team. perhaps you’ve taken one of Generation Joshua’s online courses, or been a member of a GenJ club. If any (or all!) of these are the case, you’ve experienced some of the best training that middle school and high school students can receive in the world of politics. Through Generation Joshua, you have had the opportunity to experience government from the inside, to put conservative principles in action, and to learn the ins and outs of political activism. Not only do you get to hear about the foundations of our country and learn how to walk (if you're wondering what I mean, you need to sign up to go on an SAT with Jeremiah Lorrig), but you get to hear it from the best -- caring, committed, and courageous leaders who have been doing and studying these things for years..

At iGovern, perhaps you dived into the world of campaigns, fundraising, and FEC regulations. Maybe you found the study of legislative process and parliamentary procedure to be fascinating. Those in the International Summit experienced first-hand the ever-changing nature of foreign affairs and the challenge of working with other nations and competing interests. Or, for a select few, the intricacies of the Oval Office and presidential cabinet may have caught your fancy. No matter what part of iGovern you enjoyed the most, the fact of the matter is that if you walked away from iGovern without learning anything, you accomplished a feat that I dare say no human being has accomplished before -- campers, counselors, and staff included.


On a Student Action Team, once you made the choice to sign up, there weren't necessarily many choices left... you learned about grassroots campaigning and get-out-the-vote operations. And you learned a lot about it. You saw very quickly (either because you knew it already, or figured it out the hard way) that teamwork is key to an efficient campaign operation. Perhaps we can even draw some comparisons between your van team and a campaign... your van driver, the campaign manager, made things happen, while depending on how your van worked, your navigator might very well take on the title of strategist. Further back in the van, you probably had one or two (maybe more!) people really interested and knowledgeable in politics, while others were great at communicating with people, whether in the van or at a door. All in all, you probably packed up for the trip home knowing a lot more about grassroots campaigning than you did when you were putting those GenJ t-shirts in your suitcase before you came.

So by now we've pretty well established that your experiences with Generation Joshua have taught you some valuable lessons, whether they be campaign-related, more focused on the legislative process, or anything in between. So here's my challenge to you... Take what you have learned and use it.

Don't let the training you have received go to waste. Find a candidate that you agree with and can get excited about, and offer to help with their campaign. Become involved in your local county Republican party. Keep an eye on your state legislature, and write your legislators when an important vote is coming up. Volunteer for a legislative advocacy group, such as the Parental Rights Organization or the Convention of States Project. If you prefer communications-type roles -- maybe social media? -- you could offer to help your local Right to Life group set up a Facebook page or Twitter account. The possibilities are nearly endless.

For me, this meant stepping out of my comfort zone and, with another GenJer, organizing three student get-out-the-vote efforts (not through GenJ, but still patterned after the Student Action Teams) in two states for the 2014 US Senate primaries. For some of my friends, it has meant interning for a conservative state legislator. A couple Virginia GenJers got together with young activists in the area and started a community discussion group. Others have become campaign managers and staffers, or gone on to work for groups like Americans for Prosperity. 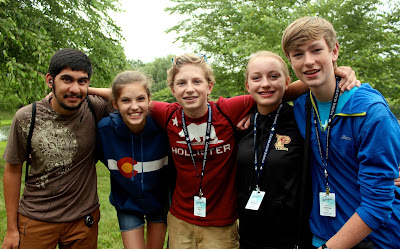 That all sounds great and grand... but maybe you're thinking that these things are too big, too grand.
"Yeah, iGovern was great, but campaign manager? That's a little too far." Well, my friend Zachary has started writing letters to the editor and submitting them to local newspapers. It may seem small ("Who even reads the newspaper anymore?"), but in reality, it's a great way to spread your message to people who will often be very encouraged by a young person who cares enough to get involved. In Minnesota, my friend Sarah helped with a voter registration drive run by her GenJ club at the county fair. Maybe you're able to keep your family and friends informed about legislation going through Congress or your state legislature, like Celtin was able to do in New York. All these things seem small, but they make a real difference. And when you take thousands of GenJers, each making a seemingly small difference in their sphere of influence... suddenly, together, we're making a big difference.

So, be a part of that big difference. Take what you've learned and get involved. Write a letter, ask your neighbor if they're registered to vote, or call your state legislators asking them to support or oppose a bill moving through the legislature.

And hey, I'm sure there will be some GenJers running for office who will need campaign staff in the future... so make sure you don't let those door-knocking skills get rusty!

By Peter Baergen (18)
Generation Joshua member
The views expressed in this post are the opinions of the author and do not necessarily represent the views of Generation Joshua. Photo Credit: Mamie Carlstrom