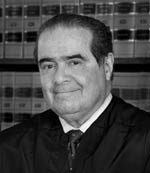 On the afternoon of Saturday, February 13, my sister and I were phonebanking at a local presidential campaign office.  Taking a break as the pizza arrived shortly after 5pm, my sister looked up from her phone, and in a quiet but urgent voice, uttered the last words I expected to hear that day: "Justice Scalia is dead."

As I pulled out my phone to search for confirmation, we heard a shocked "Oh, no!" from the next room over, and the campaign's state director announced the tragic news to the entire office.  At that moment, we all realized that this election had just become even more important: on Friday, we were merely guessing that the next President will appoint 2-4 Supreme Court justices. On Saturday, it became a very real possibility that one of our next President's first official acts will be the nomination of Justice Scalia's replacement.
For a moment, however, let's set the politics aside and remember the man who has been so instrumental in shaping the United States Supreme Court over the past 30 years.
Justice Antonin Scalia was one of the court's strongest adherents in recent memory to a strict textual interpretation of the Constitution. He was adamantly opposed to the concept of the Constitution as a "living, breathing document"—he understood that it must be interpreted based on the literal text of the Constitution through the lens of the Founders' original intent.
Appointed to the Supreme Court by Ronald Reagan in 1986, Justice Scalia took his seat on the bench in September of that year. Even before his time on the nation's highest court—Scalia served 4 years as a DC Circuit Court judge before his Supreme Court nomination—he earned a reputation for his powerful opinions and biting humor. That reputation was solidified early on in his Supreme Court tenure, and his various dissents in particular have commanded the attention of those not ordinarily intrigued by matters of law and jurisprudence simply by the wit and brilliance that marked his style. "What secret knowledge, one must wonder, is breathed into lawyers when they become Justices of this Court," reads Scalia's 1996 dissent in Wabaunsee County, KS v. Umbehr, "that enables them to discern that a practice which the text of the Constitution does not clearly proscribe, and which our people have regarded as constitutional for 200 years, is in fact unconstitutional?" 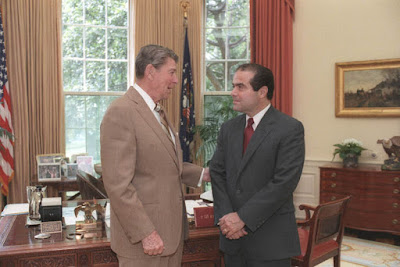 Justice Scalia was a man of conviction, a man of the Constitution, and a man of faith, and there are many things that can be said about his life and legacy. But I think it is fitting to close with this quote from a speech he gave in 2012.
"God assumed from the beginning," said the devoutly Catholic Scalia while speaking at a Living the Catholic Faith conference, "that the wise of the world would view Christians as fools…and He has not been disappointed. Devout Christians are destined to be regarded as fools in modern society. We are fools for Christ’s sake. We must pray for courage to endure the scorn of the sophisticated world. If I have brought any message today, it is this: Have the courage to have your wisdom regarded as stupidity. Be fools for Christ. And have the courage to suffer the contempt of the sophisticated world."