Those are the numbers behind Generation Joshua and HSLDA PAC's recent Student Action Team for Indiana State Senator Jim Banks, a candidate for Congress in Indiana's Third Congressional District. Sometimes, though, numbers don't tell the whole story -- so we thought we'd share some stories directly from the people involved in the SAT.

While most SATs take place in the final phases of a campaign, this one was unique in that our team came in over a month and a half from Election Day. Tyler, who has worked on two SATs previously, said it was an enlightening experience: "We got to meet Jim, talk with him, and work with him early on. Usually we see the end of the campaign, during election weekend. This time, it was really interesting to get to work at the beginning."

The strategy and planning that goes into a successful campaign surprised Chloe, one of our first-time volunteers and our champion phonebanker for the week: "Honestly, I knew that campaigns went door-to-door with information about their candidate, but I didn't realize how much they strategized to figure out which houses were most critical to visit. I also realized that despite not being able to vote myself, I could influence the election by simply speaking to those who are of voting age." 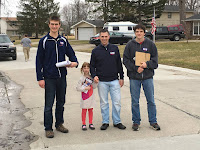 The main thing that stood out to the GenJ staff and leadership team was how much the campaign staff was invested in making sure our team always had everything we needed and how much we got to hang out with not only Jim Banks, but the entire Banks family. They stopped by the campaign office each evening during dinner and phonebanking, and on Saturday Jim and his daughter Lilly went out and knocked on some doors with one of our vans.

I got to ask Senator Banks what most impressed him about the SAT. "The Student Action Team worked through poor weather and long hours and didn’t back down from shattering all of our volunteer records in doors knocked and calls made to communicate with voters," he said. "They worked hard and inspired our campaign team in the process."

"We were very honored to have them join us," he added... "and hope to welcome them back soon." (Nothing for sure yet -- but stay tuned, GenJers!)

Senator Banks also shared some advice for you all: a lesson that he's learned throughout his career of service to our country in the Navy Reserves and the Indiana State Senate. "Character is the foundation of being a leader. Knowledge and talent may open a door for you, but your character is what will sustain you."

Like Chloe said, even if you can't vote yet, you can make a difference! Make sure your GenJ membership is current and stay tuned, because this fall we're planning on of our biggest Student Action Team deployments ever -- and we need your help!