SHARE:
Zoe Wilson is the Media Coordinator for the GenJ Club of Paducah, Kentucky. Her club recently spent a few days in Frankfort, Kentucky visiting with elected officials and then serving as pages in the Kentucky state legislature.


On Monday, March 14th, 2016, 22 homeschoolers of varying ages from West Kentucky and Tennessee, along with some assorted relatives, (parents, younger siblings, etc.) arrived in Frankfort, Kentucky around 1pm to page in the Kentucky House of Representatives. Since the session doesn’t begin until around 4 o’clock on Mondays, we had made arrangements for tours, as well as meeting with the Governor and Lt. Governor (whom several members of our club had campaigned for, and met previously) in addition to some representatives and senators in our spare time. This was a trip that members of our club makes almost every year, but for several of us, including myself, this was the first time that we’d been.


After we had all arrived, the first order of business was of course, a group picture, and then a tour of the capitol building. After a quick tour (led by a thankfully engaging tour guide), we headed downstairs to meet with Governor Matt Bevin, and Lieutenant Governor Janine Hampton, and take another (blurry) group picture, as well as several selfies with the Governor. 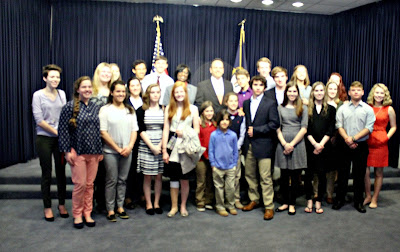 The next order of business was to meet with Representatives Richard Heath and Steven Rudy, which involved yet another group picture (I’m starting to sense a reoccurring pattern here) and a LOT of stairs for some reason. 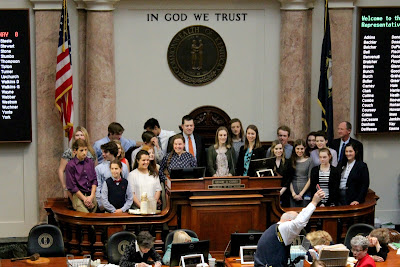 We also got to meet with Rep. Heath’s wife, Ruth, who talked with us some about the agenda for the session that day and the next. We had hoped to be there when they started budget negotiations on Tuesday, but they were running behind schedule, so no such luck.


Basically what we do, is we get to be in the chamber when the house is in session, and they have a system set up where when a representative needs something, such as some water, coffee, a roll call, or something taken to the clerk, they push a button on their desk, and it lights up a button at the front of the room that corresponds to where the representative’s desk is located, and the page goes and sees what they need, and then does whatever it is for them.


A little before 4 o’clock, we headed back downstairs into the house chamber, where they briefly reiterated what our duties as pages are, and then the session (and thus the paging) began.

It’s really pretty neat to be down there in the middle of it all when they’re in session, even if it’s a little hard to understand what’s going on at first. You catch on eventually, and once you do, it’s just like “Wow, so that’s how that happens.”

Our first day, the session only last a couple of hours, and once it was over we all headed back to the hotel where we were staying to change clothes, and then went to eat supper at a restaurant down the road from the hotel (which I was informed was tradition), where Representative Heath and his wife had kindly agreed to join us.
After supper, it was back to the hotel once more to play some card games in the lobby and discuss the day’s adventures before getting a good night’s sleep and setting out bright and early the next morning for our next tour.


At 9am the next morning, after already eating breakfast and checking out of the hotel, we were maybe just a little tired from our late night games of spoons, but gathered in front of the Governor’s Mansion in the fog nonetheless. Here we were met by another engaging tour guide (which was good, because no one wants a boring one) and despite the large size of our group, which included not only all 34 of us, but also a couple of small groups that had come for a tour as well, we managed to weave our way in and out of rooms, and down the hallway with minimal discomfort involved.  And after another group picture, just because we could, it was back to the Capitol, for... you guessed it… another group picture (the last one, I promise).


But this time, it was another West KY GenJ tradition: The Obligatory Jumping Picture.
In which we all jump in the air, more or less at the same time, and attempt to get a picture of it, and like maybe two people look good, half a dozen or more look like they’re sneezing or something, and the rest of us are just trying not to fall on our faces. Wait. Remind me why we do this again? 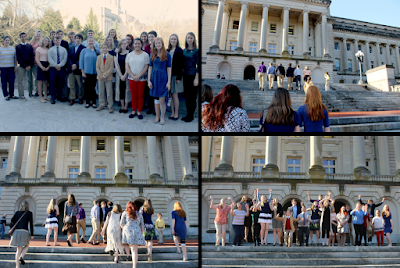 Once we all managed to catch our breath (because you don’t want to know how many tries it took to get that picture) it was back yet again into the House chamber to meet with Rep. Gerald Watkins, and it was about that point that we realized we were running about 30 minutes ahead of schedule. Luckily, we ran into Rep. Tim Moore, who was more than happy to talk with us while we waited for Rep. Watkins. After we met with Rep. Watkins, we headed upstairs and downstairs and all around (because I swear, the capitol building is even bigger on the inside then it looks on the outside) to finally reach the conference room where we met with Senator Danny Carroll for about an hour, and then headed downtown for lunch at a local pizza parlor (another tradition apparently, but a tasty one), then at 1pm, it was page orientation once more, before the session began at 2.


At that point, I wasn’t feeling very well and opted to not page the second day, and just sit in the gallery and observe, but the feel of everything was very different from the previous day. The session felt much shorter, and the entire atmosphere was a just a lot more casual. I believe it was over well before 4 o’clock, and then it was time to head home.


Overall, it was a great experience. It was a great group of people to go with, and we got to meet a lot more great people. It was a lot of fun, and very educational, but not boring (which is impressive, because as we all know, there is a fine line between the two), and I can’t wait till next time.