SHARE:
By Peter Baergen
iGovern has always offered a variety of unique roles for students to fill, and this year is no exception -- in fact, with the addition of iGovern Statecraft, there are many more! So, if you haven't been able to decide, here's the basic rundown of all the ways you can change the world at iGovern 2016. 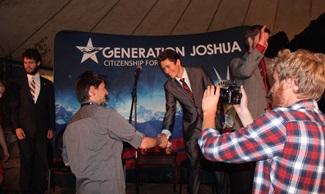 Do you have what it takes to run for the highest office in the land? Can you balance the responsibilities of your office and the demands of a fast-paced and ever-changing campaign environment? Can you reach across party lines to win votes without compromising your principles? If your answer is yes, then you may want to start making plans for what may very well be the most exhilarating and exhausting week-long effort you've ever done: running for President of the United States at iGovern East or West.
If you are too stately and respectable for the "silly season" of the Presidential campaign, however, the Senate might be just your thing. As a United States Senator, you pride yourself in your chamber's deliberate and careful consideration of the issues facing the nation, as well as having the unique and time-honored tradition of the filibuster at your disposal -- a privilege that you colleagues in the House are not granted...
But if fast-paced action and constant public policy debates are your thing, then chances are you'll make an enthusiastic and effective U.S. Representative. This is where things happen, and fast -- if you get distracted for even a minute (or escorted out by the Sergeant at Arms) you're likely to miss some key action.

Maybe Senator or Representative aren't quite enough -- your constituents need to be represented by someone with more sway in D.C. than your average Congressman. If you feel that's the case, maybe Majority Leader or Whip in the House or Senate might be right up your ally -- setting the agendas for the chambers and ensuring that your party sticks together on key votes. Or, lobby your party leaders for a committee chairmanship, where you'll make the final call on which legislation is considered, and which bills never see the light of day under the resounding bang of your gavel.

Who really needs the legislative process, though, when you can influence policy as a member of the President's Cabinet? Communicate the President's budget priorities to the powerful Appropriations Committee as Secretary of the Treasury, or serve as the nation's top diplomat as head of the State Department. If this sounds like you, then be prepared to lobby the President in hope of an appointment!
On top of all that, you can capitalize on your influence by becoming a top-notch political operative, serving as a party chair, campaign manager, or even creating your own political machine to shape the election (have you and a friend ever wanted to be the next Koch Brothers?).
These are the main roles you can fill at Generation Joshua's iGovern East and iGovern West summer camps... do some mix-and-match (ever wanted to be a U.S. Senator, a Senate committee chair, run for President, and manage a multi-million dollar political operation, all at the same time?) and the possibilities are endless. But be prepared for endless to go even farther -- stay tuned for a new post about how you can save the world at iGovern Statecraft!
Sign up for iGovern here. 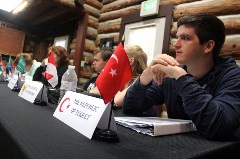 P.S.: There will be an International Summit at iGovern West as well! The summit is already filled up (in fact, West registration is almost maxed out, so hurry and sign up here!), but you still have a chance to join the Summit -- seeking an appointment as American Ambassador. So, polish your interview skills and get ready to lobby the President for an appointment!