Tony is a Generation Joshua Alum and Member of the Generation Joshua Leadership Corps and has helped lead Student Action Teams, served as an intern in the National Headquarters, and as a iGovern Counselor. The views expressed in this post are the opinions of the author and do not necessarily represent the views of Generation Joshua or GenJ affiliates.

Every patriotic American takes it as a source of personal pride to live in the greatest country on Earth. To see this truth questioned in this election cycle, then, has been disconcerting and confusing for many of us. Tensions run high as we rush to defend our heritage, but as neither of the leading candidates’ vision for our country resonates with me, I find the need to give pause. As our divided nation is confronted with different explanations for our country’s greatness, I believe it is time for all Americans to seriously reflect on what makes our country great. What, for that matter, makes any nation great? Is it our Constitution? Is it our Christian heritage? Our military strength? Is it #murica?

What makes a nation great? This election cycle has seen an upsurge in nationalism, defined by the Merriam-Webster online dictionary as “a sense of national consciousness exalting one nation above all others.” A love of heritage, pride in one’s native culture. This has manifested itself in the United States through a stronger push for “English only” legislation and calls for reduced immigration. From a nationalist perspective, America is great simply because it is America. In other words, #murica. Our culture is certainly unique, but does that make our country superior to others?

Perhaps a nation is made great by its ideals. Maybe America is great on account of its stated values—a commitment to liberty, justice, and equality. Whether we hold ourselves to our values consistently or not, our country represents standards that reflect the best universal interests of humanity.

Maybe a nation finds greatness through power. Many of the world empires of the past—Roman, Persian, Ottoman, and countless others—considered themselves great on account of their military superiority and dominance over their neighbors. They believed, as the Athenians put it, “The strong do what they can, and the weak suffer what they must.” This ideology has resurfaced today in one of our leading presidential candidates, who has repeatedly stated that America stopped being great when America stopped “winning.” Does hegemony amount to greatness?

Or perhaps our greatness comes from something deeper. As Christians, we should look to God’s word for the answer. The Bible tells us, “Righteousness exalteth a nation: but sin is a reproach to any people” (Proverbs 14:34, KJV). From a Christian perspective, then, a nation’s greatness results from a set of principles grounded in Christian doctrine. Some of these principles are clearly present in the USA’s founding: The belief that all people are made in God’s image and are equal in his eyes. The belief that people should be free to follow a personal relationship with their God not mediated by a state church. The belief that God has created the mind free and given people the power to believe and speak what they want. 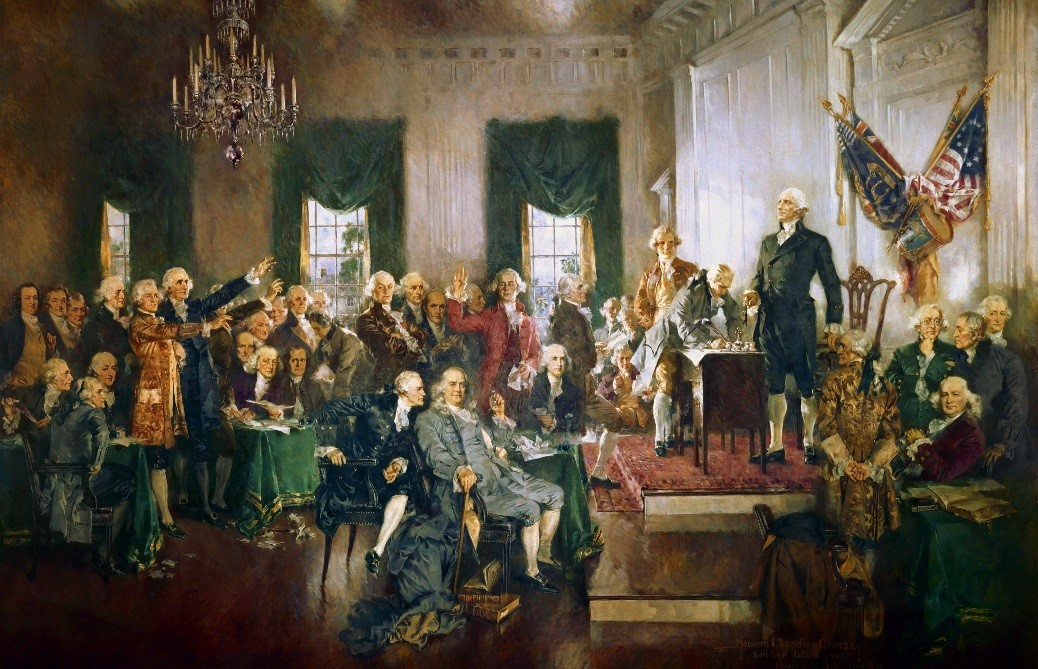 As a nation founded on these Christian principles, America clearly is positioned for greatness, and we rightfully expect our country to take a bold stand for human rights the world over. But, as cynics are quick to ask, what about our national sins? Slavery, nativism, segregation, and Native American genocide leave dark stains on our history compounded by the modern-day evil of abortion. These are clearly not minor faults; how could a nation that tolerated the dehumanization of minority races have been great? How can a nation that tolerates the murder of its unborn children be great? Were we great in our past? Are we great now? In theory, America is a Christian country. We take pride in our founding values, but do these values matter if we don’t live up to them?

Perhaps some perspective on what we mean by a “Christian country” will shed some light on the subject. Yes, our Constitution was drafted consistently with Christian doctrine. Yes, the majority of Americans identify as Christians. In spite of this, God’s Word is clear that it would be a mistake to associate Christianity with a nationality. Christ reminds his followers that our citizenship is in heaven, that his kingdom is not of this world (John 18:36). He even reminds us that “heaven and earth shall pass away” (Matthew 24:35, KJV). By keeping their true allegiance to the eternal Kingdom of Heaven, Christians can avoid falling into the trap of thinking that their country is a “chosen” nation. All earthly countries are temporal, imperfect, and fleeting—even the United States.

Keeping in mind that the United States is an imperfect, earthly nation—one of many—Christians can appreciate the fact that the U.S. has accomplished great things in this world—possibly more than any other country in history. The United States is a pioneer in modern democracy, creating a model of governance now accepted the world over. Our Constitution gives the common people control of their government, allowing them power a medieval serf or feudal Japanese peasant could only dream of. The fact that Americans can question their country’s greatness without fear of arrest is itself a testament to how great their country is. If we are not the most perfect nation in the world, we are certainly the least imperfect. While the worst of ourselves contains plenty to be ashamed of, the best of ourselves has made an unmatched positive impact on the world. We lose our way at times, but when we follow our founding Christian values, our country legitimately exhibits an earthly form of greatness.

God has blessed us during our short stay on earth with some incredible privileges in the freest country on the planet. While we await our future eternal home, we remain blessed to live in the greatest country on earth, the United States of America.