A couple weeks ago, I attended the March for Life. I was asked to join the speakers on stage. And as I spoke with the leaders and activists backstage, and watched Mike Pence speak to the thousands and thousands of people who attended, it struck me that as amazing as it was to be invited to that stage, it was truly a miracle that came from a tragedy. 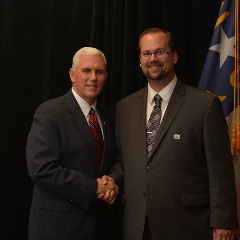 Sometimes tragedies make something beautiful, sometimes they don’t. In 1981 in a backwater town in South Dakota, tragedy took the form of an evil man, a traveling carnival, a spiked drink, and the rape of a 13-year-old girl. What she went through was something that no one should ever suffer. It was evil on our earth, of the kind that parents hope is never visited upon their children.

She didn’t have a lot of options, and at the age of 13 didn’t fully realize what had happened. In her fear she hid the resulting pregnancy for as long as she could. As you expect, the following months were filled with hard decisions—and especially what to do with the baby. Some family friends brought up the idea of adoption, and after some consideration the search began.

While that was happening, in a small town in Eastern Washington, another young couple was receiving the news that they could have no children of their own. The waiting list to adopt was years long.

Then came the phone call. It was their pastor. He had just received a phone call from a friend about a young girl who was going to have a baby she couldn’t keep. It wasn’t normally how adoptions were done in the 80s, but the young lady had made a request. 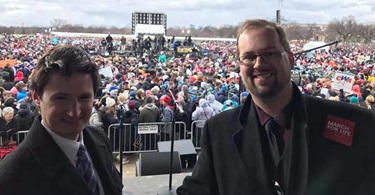 In the midst of the decisions and planning that the young lady was being forced through, she had made one request. She asked her parents to help her find a family with a mom and dad who would provide the care and nurturing that she could not. She believed that the best thing she could do for the life that she now carried was to give him a family. One that loved him deeply, cared for him, and would help him become all that he could. It was an utterly compassionate and unselfish act. She had every reason to think about the trauma that she had been forced through, yet in that dark moment she showed me a love that I have rarely seen.

I was that baby.

She gave me the gift of life when she had every legal right not to. At the time of my birth, over 25% of unplanned pregnancies ended in an abortion. Far more so in the case of a young lady barely into her teens. Growing up, I didn’t know any of that. I just knew that I was adopted, and that my parents had chosen me’ they didn’t have to, but they had. The showed me love in every way they knew they should, and without a doubt I am thankful for my parents. I just didn’t know the entire story until I was grown.

It’s a tragic reality that 1.2 million young boy and girls every year are never given the opportunity that I got. The reasons are many: desperation, shame, ignorance, or anger. Sometimes the concern is financial or medical. Each of these reasons are powerful motivations. Yet I think my birth mom had one of the strongest reasons to consider an abortion. A 13 year old girl, raped and now pregnant. This is not how things are supposed to go, and anything that might make the world a bit more normal would seem a logical thing to at least consider.

That young lady is now married with a lovely young son of her own. She and her husband do medical work oversees for people in dire straits. Though her road in this life was by no means easy, she gave me the gift of life that, statistically, 62% of the children conceived in rape that year were not given. 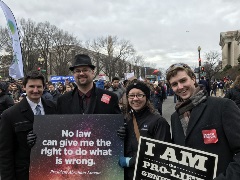 A year or two ago I was privileged to share my story with several members of Congress, and as we were discussion policy questions related to abortion, I asked one of them a question.

“Ma’am, I understand why the rapist must be punished. Justice must be done and the crime is monstrous. But why should the baby be killed? Why should I have been killed? I didn’t do anything wrong. I simply existed, and somehow that became worthy of death.”

The Congresswoman looked up at me. “There’s no good answer to that question, is there?”

No, Congresswoman. There isn’t.

I was given the precious gift of life from the midst of the horrific circumstances and I cannot stand to see an innocent child suffer and die when I might be able to prevent it.

That is why I march.