That’s right, guys! I’m back. Just because I have to be formal and stuff, I’ll introduce myself. My name is Sarah Estes, and I served as the (super awesome redhead) Vice President of the GenJ Club of Jacksonville during the 2016-2017 school year. I’m also a giant nerd, but aren’t we all? Anyway, last year, you may recall that I wrote a blog post about lobbying Florida State Senator Aaron Bean on Common Core. This year, I’m writing about something that’s WAAAY more awesome. Here’s the story… 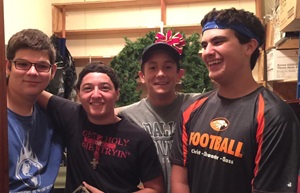 Our GenJ club of Jacksonville is in the middle of a meeting. The question that’s been hanging in the air since the beginning of the year is finally spoken: “What is our club going to do to give back to our community?” No one really knows what to do besides the generic give-canned-goods-to-a-food-bank shtick. Then, one of our members comes up with the brilliant idea of a talent show to fundraise money for a pro-life cause. The idea is agreed upon. Everyone then unanimously votes to give all proceeds from the show to St. Gerard House, a maternity home and high school for teen moms, located in St. Augustine, Fla. Then, the real work begins.

THE TWELVE (OR LESS) LABORS OF THE GENJ of JACKSONVILLE CLUB:

With our idea and cause decided upon, our club then had to find a place that would host our event for free, round up talented performers for the show, get them to submit digital auditions, make sure that we had all the equipment we needed, persuade people to bring baked goods to sell at the show, get volunteers to help set up and clean up, and do countless other things needed to pull a show off. It was totally effortless, wasn’t it?? Wasn’t it???

It’s easy to manipulate words to make it seem like our club effortlessly pulled this show off with no hitches whatsoever. However, this was much more work than singing kumbaya and holding hands. This show took months of demanding work, many tears, lots of sweat, and even some blood (don’t ask.) Our club sponsor, Kelly Estes, took the brunt of the workload, (Thanks, mom!) sent thousands of emails, and basically mentored the entire club over the summer. She and 3 other GenJ moms spearheaded the organization effort. 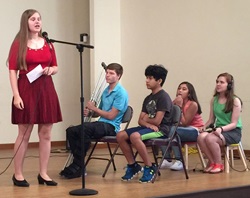 Just when it seemed to be smooth sailing, we had organizations back out on helping us with the show, people try to sabotage us, and some not willing to do any work. This was a real-world experience/reality check that was the most reality-y you can get. Like, more real than a ton of bricks getting slingshotted at you at 200 mph. If you were at Statecraft this year and were working in the Executive Branch, you might recall frantically trying to fix problems that someone (*cough* DOD *cough*) caused. (You can’t go to DEFCON 1 without the President, people!) That was basically what happened all summer during the “quickly try to put together and pull off a giant live show” phase of pulling off this Variety Show.

Oh, you need microphones? We never said we’d give you them, even though we did put that in writing a month ago. You need the piano? Now it’s $150 to use it. Even though we said that you could use it for free. (Thank goodness they eventually changed their tune and we got use of the piano and microphones for free.) Oh, did I say I would do that fill-in-the-blank job? I don’t want to anymore. These problems were

quite annoying, but they did help in exposing our club to how people act in the real world, and more importantly, how to solve those problems. Despite all those people who were quite aggravating, we did have some people who wanted to help us. We were very thankful for some sweet old ladies who made lots of homemade pound cake and cookies to sell at the show and a few Knights of Columbus volunteers. Don’t get

me started on the program ads (7 were sold) and all the work that Finnis’ mom, Mrs. Ginder, put into the program! The publicity was another giant piece of the puzzle, and we had lots of GenJ club members and parents helping to spread the word, at churches across Jacksonville, and prayer and homeschool groups. Several of us members even got an introduction to speaking to lots of people, doing a 2-minute “pulpit talk,” which is a fancy way of saying we got the pastor’s permission to give a short promo about the show just before church ended. The second time I did the pulpit talk, it wasn’t nearly as scary as the first!

As if that weren’t enough, the morning of the show was the first and only time all the acts were rehearsed together, though everyone practiced their talent over the summer. Did we manage to make the show a success? 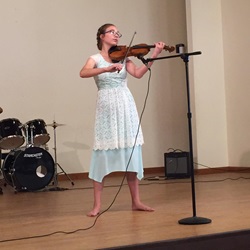 Aug. 19, went almost perfectly and the audience loved it. Our club ended up raising $1,055 dollars for St. Gerard House in the space of two hours! It was completely mind-blowing to see how people of all different denominations of Christianity came together as brothers and sister in Christ in order to help a pro-life cause.

Well, I hope I didn’t bore you, make too many terrible jokes, or make you cringe too much. But if I did…. deep down I really don’t care. Did anyone get that? Chaz reference, anyone? No? Okay, I’ll stop now. Peace out!